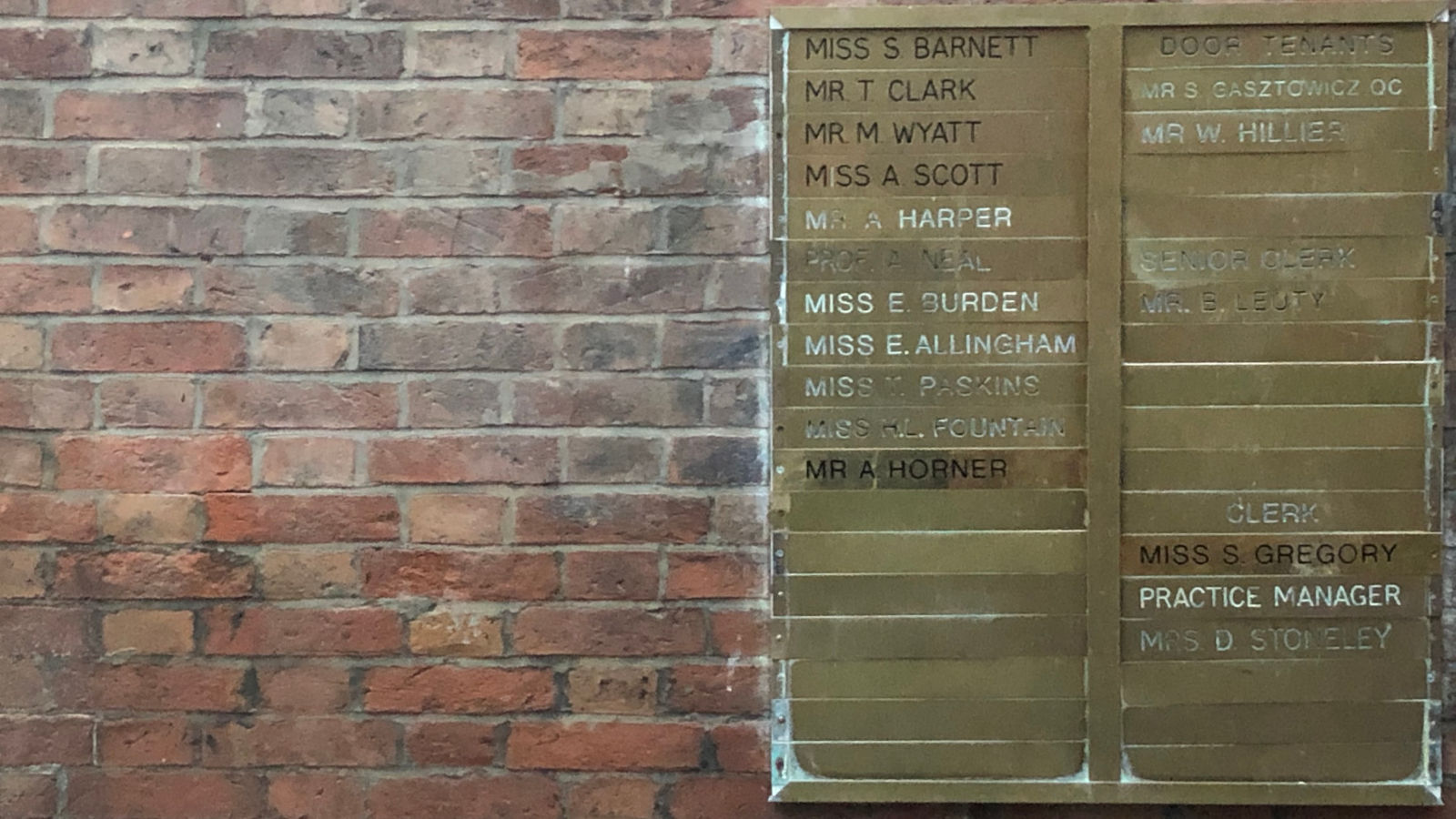 The Greyfriars area has historically been Leicester’ ‘legal quarter’. However, there was a lack of knowledge and little research undertaken into this interesting topic and so this project aimed to tackle this issue. Led by Iain Jones, who had previously worked as part of the legal community on New Street, students researched the legal history of properties and the occupiers using historic trade directories and links with the legal community as a way into the research. They undertook training in oral history and undertook interviews with retired members of the legal community.

The results of this project are a series of audio interviews and transcripts which are available at the East Midlands Oral History Archive. A walking tour was also developed by students at the University of Leicester and is available for download.

Soundbites available here to play. For more information or for the full interviews and transcripts, please contact the East Midlands Oral History Archive.

The law society in Leicester ran the law library which was terribly important because the university had a crap law – I mean it had only just started basically- and you needed books, there was no downloading anything; you wanted to read something, you went and read the book. And that became situated in the Turkish bars in Friar Lane, I can’t remember the number but there was a Turkish bars – very fine building actually. Run by a complete dragon of a woman, but you could go down and – and it was in constant use so you met a lot of people there, constant use.

the town wall rang up Millstone Lane, Friar Lane was the first street actually inside the town wall.

So we did about a couple of family cases some – in those days you had to get evidence of adultery and it used to be that by written consent but occasionally you got some interesting photos that would come in, catching the adulterous couple taking the equivalent of 1970s selfies *laughs* in the nude, which would go around the office and most of the other offices in New Street very quickly. But of course serving all due decorum, keeping things private to a degree.

We used to all play football on a Saturday morning up off the Narborough Road, what we used to call the superdome but we had to clear the dog debris before we started playing and it generally followed on from a night out in town or away on tour or whatever, and we were an unhealthy bunch but we had a good spine to the team.

…we used to meet up for lunch, go play snooker at Osbornes snooker hall just down on Silver Street, and our life was pretty good, you just go and get some food off the market, we all lived round Clarendon Park and Queens Road and Knighton, we met up in the Craddock on a Friday night and had lots of ridiculous parties.

I re-took three and failed two again so I left at sixteen, and basically went to sign on because I had literally had no idea what I wanted to do.  I didn’t work for my O’Levels at all, I just thought I would be able to walk it just like I did when I was fourteen so I deserved to fail, I literally got E, U, E, U, E, U E.  I remember it well.  I did actually pass geography so I don’t have maths, I’m hopeless at maths so I probably wouldn’t be able to be a Solicitor now.

I would have been about eighteen when I joined British Telecom and over the ten years I worked my way up hugely and I ended up being the Telecoms Officer.  When I left there in 1995 I was on just under £20,000 a year which was a lot of money with a good pension in a good firm to work for but I was bored, so bored.  Then one day somebody said to me ‘If you carry on the way you are you’re going to be the youngest ever something or other,’ and instead of thinking that was brilliant I thought ‘Oh my God, I can’t do this, I’ve got to do something’.

So I went on holiday with a friend, Margaret who worked there, and I was lying by the pool and I sat up and said ‘I’m going to do a law degree!’.  I came back in the December, I didn’t even realise that the University terms were October – I wanted to start my law degree! I’d made my mind up. So I went to see Debbie Lockton from the Law School, she interviewed me for the part-time law degree and I remember her saying ‘Well why don’t you just be a Legal Secretary?’ and I said ‘I want to be a Solicitor!’.  I started whilst working for British Telecom, I started the LLB Honours course in what was then the Leicester Poly for the first year, two evening a week for four years and carried on working full time at British Telecom.

Imogen Cox, Getting into Law

…and it was when I was based in that area, where I did some prosecution work for the police and I closed down a brothel which was operating on Granby Street. But it was the [laughs] the amusing [laughs] the amusing – there were two amusing aspects, one is that I knew the police officer, who was sort of conducting the case, quite well, I’d been at a party with him the week before and he’d said to me that in order to get the evidence as to what was going on they had to send police officers in there, you know, not in police uniform, undercover, and two or three they sent in there they weren’t able to use the evidence because they got tempted by what was being offered.

But when I look back, I suppose yes it was the legal area.