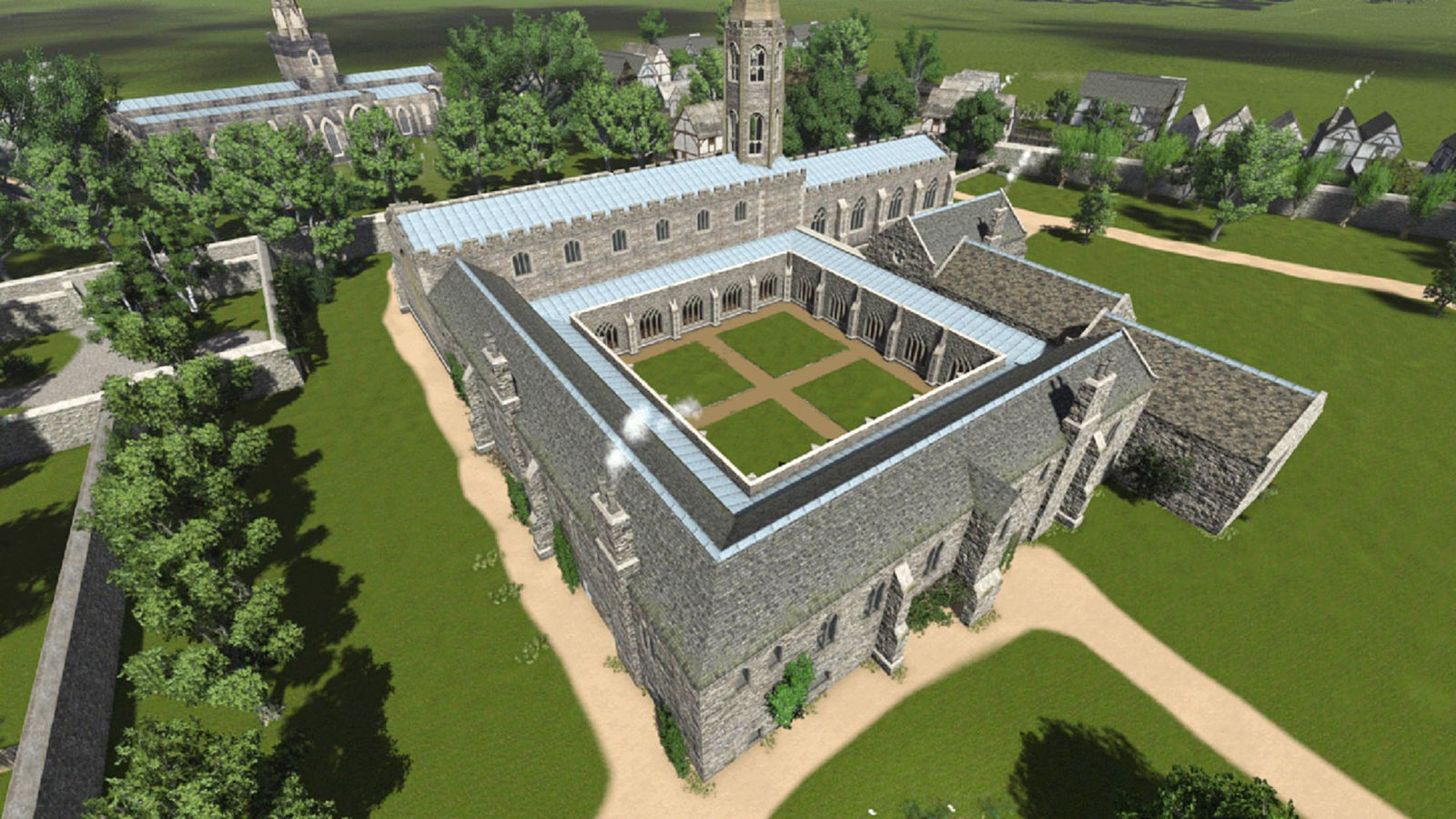 This is the site of the priory church of the Franciscan Friary. The Friary is said to have been founded by Simon de Montfort (The Younger, Earl of Leicester from 1238 to 1265, about 1255. The friary stood south of St Martin’s churchyard, and the gardens and grounds belonging to the Order extended from the Market Place nearly as far as Southgates. The church was demolished soon after the dissolution of the monastery some of its old stones and timber were used to repair of St Martin’s church.

Sympathies held by Leicester Franciscans for Richard II brought serious consequences upon the friary in 1402. A Franciscan declared to Henry IV that he and ten other friars at Leicester, together with a Master of Divinity, had conspired in favour of the deposed Richard. Consequently, eight Franciscans from Leicester and the master were arrested and brought to London for trial. The remaining two friars escaped. After two juries had failed to reach a conviction, a third jury found the prisoners guilty, and they were executed.

Two other Franciscans from Leicester, presumably the two who had at first escaped, were executed at Lichfield about the same time. In 1402, at a general chapter of the Franciscans held at Leicester, it was forbidden for any member of the Order to speak against the king. Apart from this, practically nothing is known of the history of the Leicester Franciscans. In 1538 the house was surrendered by the warden and six others following its Dissolution.

Find out more about the Friary and its story at https://www.storyofleicester.info/faith-belief/grey-friars/.

The church of the Grey Friars at Leicester is now most famously known as the burial place of King Richard III, whose body was interred there following his defeat and death at the Battle of Bosworth (1485). Some ten years later Henry VII, his successor, had a ‘faire Alabaster Monument’ raised to mark the burial.

Tradition records that following the Dissolution Richard’s grave was ransacked and his body paraded through the streets of Leicester before being thrown into the Soar at Bow Bridge. David Baldwin, however, suggested that there was little to substantiate the tradition and although the site is now obscure it was at least possible that the King’s remains still lie among the buried remains of Greyfriars church.

Following the Dissolution, the site of the Greyfriars became the property of Sir Robert Catlyn, from whom it passed to Alderman Robert Herrick. Herrick constructed a substantial town house and garden within the eastern part of the Friary site. The Herrick family owned the site until 1711. In 1743 the property was divided by the then owner, Roger Ruding of Westcotes and it was then that New Street was laid out.

The remnant of the former Friary site passed through several hands prior to its substantial alteration by Thomas Pares during the late 18th century. The house was finally demolished to make way for Greyfriars Street in 1872. Stone footings apparently representing ‘an earlier stone cellar’ were found at the rear of 12 New Street. Inspection of the nearby gardens revealed architectural fragments including tracery possibly of C14th date and possibly derived from the friary buildings.

After Greyfriars House was established the former precinct of the friary became a walled garden.

In Autumn 2012 three 30m X 1.7m trenches were dug mainly looking for the remains of Richard III. The chance of finding Richard’s remains were considered remote, but it was also thought there was a good chance of increasing the understanding of the layout of the friary.

The excavations identified what appeared to be location of the eastern arm of the cloisters, the chapter house and part of the chancel of the church. Several burials were identified in the chancel. One of the burials found in the choir (west end of the chancel) was exhumed, as it was considered that it might be Richard’s remains.

Taking into account the location within the church, the various wounds that were evident on the bone, the high status of the location contrasted by the haphazard nature of the burial, the stratigraphy, C14 dating and DNA analysis, it was concluded that the skeleton was that of Richard.