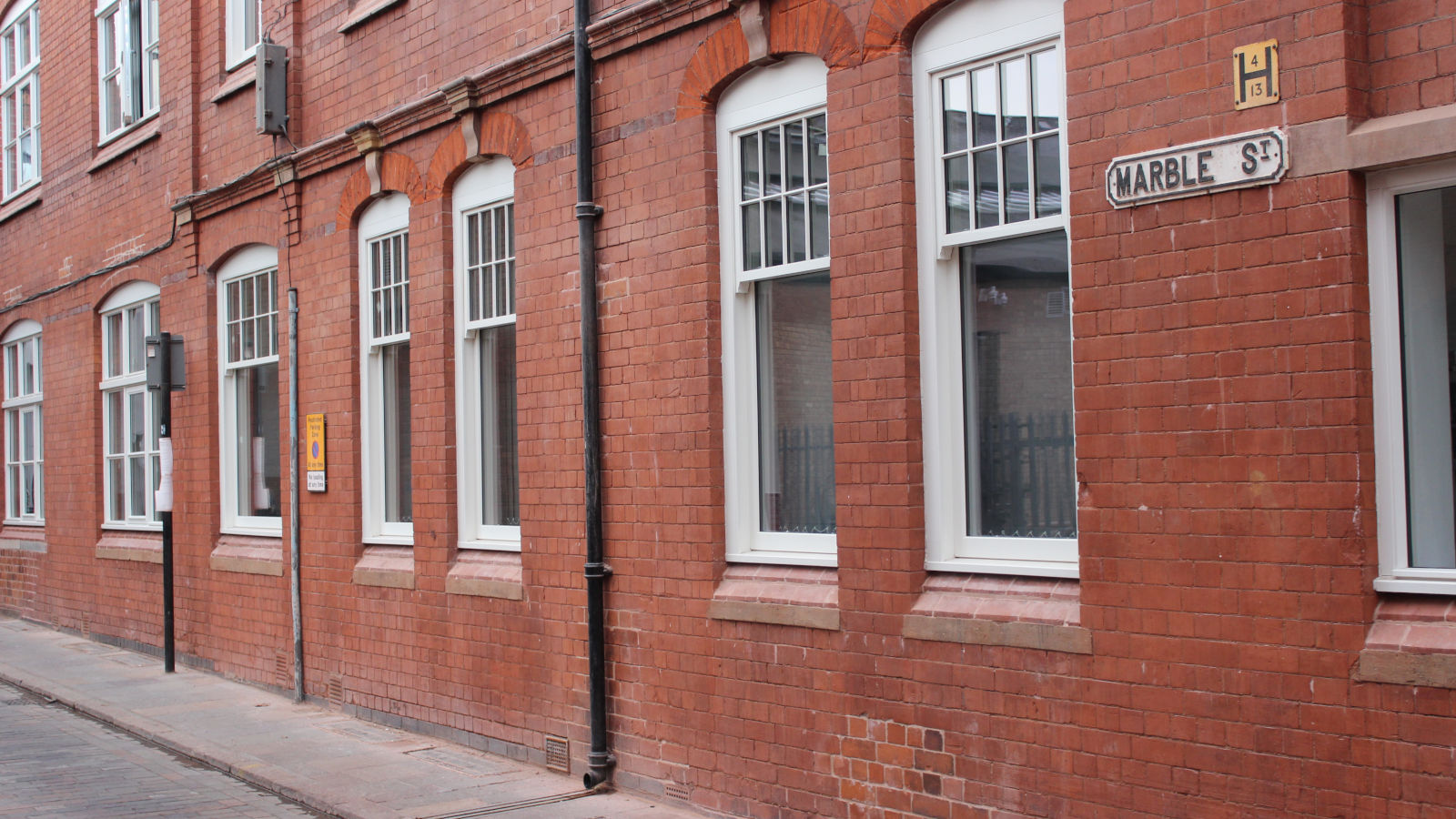 22 Millstone Lane was known as the ‘Old Barn’ in the latter part of the 18th century, capable of accommodating a large number of people.

Little is known about its use until the end of the 19th century, when it was together with 20 Millstone Lane described as a commodious dwelling house as well as surgery, with stabling for up to five horses. It was occupied by Mr. Matthew Hack who lived on the first floor while practising as a veterinary surgeon downstairs.

It was later occupied by a Mr. Hayward, whose tenancy expired in 1894, and it was advertised as free for rent after June this year. The property was described as suitable for offices or other business purposes, being located in the very centre of Leicester’s legal and professional quarter.

A number of hosiery factories were built in areas where the workers lived. This was mostly in the north and north east of Leicester and included the Greyfriars area.

25 Millstone Lane is on the corner with Marble Street and is a three-storey former factory building. A moulded brick panel on the façade bears the inscription ‘1900’. This tells us the time period in which it was built and is proof that the hosiery industry was thriving at that time despite industry competition.

Part of the Greyfriars area has now become a prominent residential area and as such the building has now been repurposed into student accommodation. However, as an acknowledgement to its history it is still known as ‘The Hosiery Factory’.

Leicester’s knitting industry continues to thrive and much of the city is shaped by its industrial past.

The hosiery industry in Leicester was well established during the Victorian era and comes with a rich history. Even as far back as 1751, Leicester was one of the most important knitting towns in the country with 1000 hand frames in use. During this time, hosiery manufactory was performed by framework knitters who would work either from home or in shops.

However, by 1845, the number of domestic knitters started to reduce due to the availability of factory work. The transition from the home to the factory came with a significant wage increase. Women went from earning around 3 shillings a week to 9 shillings, with men earning up to 15 shillings a week. This was due to the increased production speeds and decreased manufacturing costs in the factories.

Another reason the handknitting industry suffered was because they had to compete with factory made goods. The factories had new methods of production, which left handmade hosiery and specialist work in low demand.

The Introduction of Hosiery Factories

Despite their obvious success, factories were slow to be introduced to the knitting industry in Leicester. The first was built only in the mid-19th century, but once established the rate of development was rapid. By 1891, 95% of knitted goods were produced in factories.

In Leicester, most of the hosiery factories were built in close proximity to the warehouses. This was mainly south of the Newarke and led to the industry becoming localised in this new district until the end of the 19th century.

Interestingly, the loss of jobs for home knitters who did not transition to the hosiery factories enabled other industries to employ those displaced. By 1900, footwear manufacturing and engineering companies challenged the knitting industry as the biggest in Leicester.

While some firms have been lost, many new firms were founded especially in the 1960s and 70s by migrant businessmen and workers from Asia. The knitting industry has continued to thrive and is therefore still the one that many instantly associate with Leicester.

The Nag’s Head Inn was an old pub that stood on the site of today’s The Criterion. It became the centre of an anti-vaccination riot on November 24th 1881, as an auction where belongings of those fined for not vaccinating their children was held here. The auction was hosted by the auctioneer Frank Radford and his business.

Leicester had a reputation in the 19th century for being unsanitary and rife with disease, which meant that vaccination was pushed heavily here. Laws were introduced across the 19th century which gradually made vaccination compulsory, with fines being introduced for non-compliance and imprisonment for non-payment of those fines.

From this highly publicised event, the anti-vaccination movement increased. In 1885, growing concerns about vaccination grew and a rally of 100,000 gathered in Leicester, called the Leicester Demonstration March to march against vaccination (at this point vaccinations were not working properly due to poor practices). This protest culminated with the 1898 Anti-Vaccination law, in which non-vaccination was legalised, and allowed parents to have a certificate to prove they were ‘conscientious objectors’.