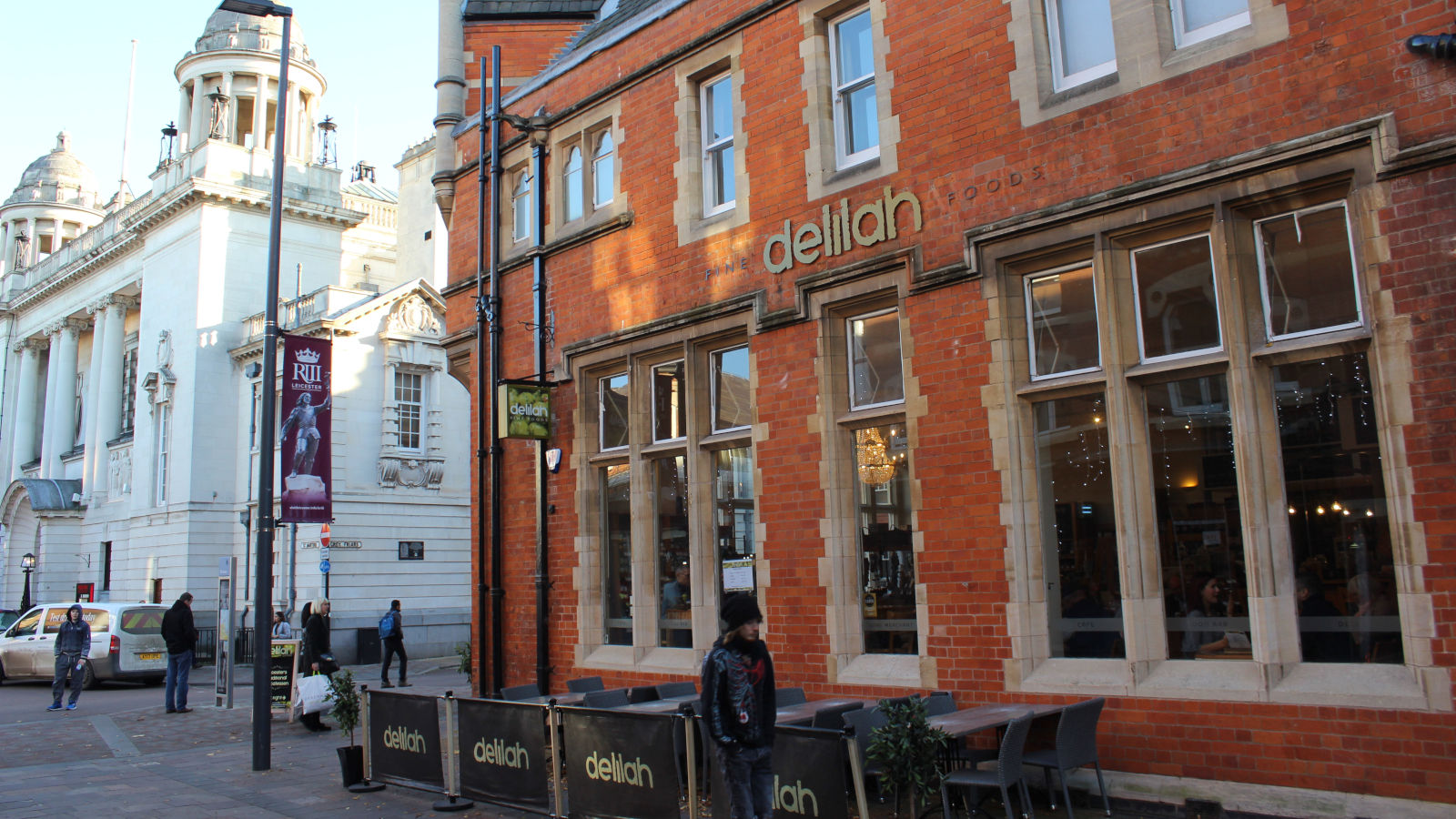 4 St Martins, now owned by the delicatessen Delilah’s, was previously the Leicester Trustees Savings Bank, having been built for that purpose in 1873. It is situated on the corner of St Matins and Grey Friars, close to the Richard III visitor centre.

The building is emblematic of the economic development of Leicester during the Victorian period and is also an excellent example of 19th century gothic revival architecture in the city. The building is furthermore important as Leicester Trustee Savings Banks also had a number of links with prominent figures on 18th and 19th century Leicester society.

Today the building once again part of a thriving area of the city and is an excellent example the success of the Greyfriars Townscape Heritage Initiative’s aim to repurpose and rejuvenate the historic buildings in the area. Therefore, we believe it is an interesting and important building in the life of the city of Leicester.

21 St Martins has been an important building for various businesses since the middle of the 19th Century. Over 150 years the property has been host to various architectural firms, a brewery, offices for the Leicester Mercury, an accountancy firm and various educational establishments.

Unfortunately due to a lack of textual documents we have few exact dates as to when the property changed hands in terms of its uses. The earliest reliable records we have of the property are from 1842 which lists 21 St Martins as an Architectural firm run by William Parsons. By 1849 William Parsons has formed a partnership and the company had become Parsons and Dain. The architects firm later became Dain and Smith in 1855 as it appears William Parsons left the partnership. This company occupied the property until 1870.

In the years 1882 to 1888 the property appears under ‘Chronical and Mercury offices’ and on an 1888 ordnance survey map it bears the legend ‘Printing works’. In 1888 the property is also labelled as John Bell and Co, Brewers.

The next dates we have in the records is in 1909 where the property has become a Municipal Training college for domestic students. This remains as such until 1922 when the property was bought by the educational committee and became Alderman Newtons girls school. As the boys school grew, St Martins was repurposed in 1960 to be an annex and cafeteria until 1999 when the school was closed. Since then the property has been used as office accommodation as well as being used by the nearby cathedral as a meeting and conference location in an attempt to improve contact with the community.

The architecture of this building is a very fine example of what is customarily described as a ‘double pile’ house, a plan-type which created a house two rooms deep. This important plan type, introduced in the final quarter of the 16th century and used by Inigo Jones for Queens House, Greenwich, assumed greater prominence in the second half of the 17th century and the early years of the 18th century.

Following the dissolution of the monasteries the land which was formerly part of Greyfriars including the site of 4 St Martins changed hands a number of time. The church and priory of Greyfriars were closed due to the dissolution of the monasteries and sold to John Bellowe and John Broxholme for the removal of roof lead and timbers in 1538. Sir Robert Catlyn, later Chief Justice to Elizabeth I, purchased Greyfriars, including the ruinous church and priory, in the 1540s. Having bought the land from Catlyn, Robert Herrick built a mansion house in 1600 in the east portion of the site.

Later in 1711, Herrick’s descendants sold the mansion and its land and gardens to Thomas Noble. The Redevelopment of Greyfriars 1740-1874 Thomas Noble, the son of the Thomas Noble who purchased Greyfriars in 1711, built New Street though the site in 1740, splitting the former Greyfriars site in two. The section of Greyfriars to the north of New Street, which contained the house and gardens, was sold to William Bentley in 1759.

By 1800, Thomas Pares had acquired the mansion along with its lands and built a bank in the north-east corner of his garden. On Pare’s death in 1824, his History of Greyfriars house and its land was sold to Burnaby. The Leicester Corporation purchased this area of Greyfriars in 1866 as a possible location for Leicester’s new Town Hall. However, this plan was abandoned and, in 1872, Grey Friars street was built through the site, separating Pares’ bank from the rest of the land. The Leicester Trustee Savings Bank, designed by Edward Burgess, was built on the corner of St Martins and Grey Friars, opposite Pares’ bank, in 1874.

The new building at 4 St Martins designed by Edward Burgess was constructed in the fashionable Gothic Revival style, incorporating a number of typical features of the style. The building was built from red brick with white stone dressings costing nearly £500. The Spencer’s Illustrated Guide to Leicester (1888) provides a useful contemporary description of the building;

The entrance is through a large stone arch, which leads by a smaller arch to a very spacious office, 50ft. Long by 30ft. Wide, with a floor of encaustic tiles, and a large lantern light. Adjoining this are the managers private room, and a small strong-room. The chief strong room is below, in the basement, and both are fitted with Milner’s fire and thief-proof doors. On the first floor is the board room, 33ft. by 23ft.

A portrait of the late John Ellis, esq., hangs over the fireplace. There are also apartments for the housekeeper, lavatories &c. The whole of the iron and brass work is by Skidmore, of Coventry, and the woodwork is stained oak.

Furthermore, new Bank of Ireland signage was installed on the
façades of the building (Planning Application ref. no. 198109342). During this period the building also experienced issues with damp and dry rot, something which was backed up by photographic evidence seen at the records office. The condition continued to decline after the Bank of Ireland vacated the building in 2006.

Following the Bank of Ireland’s departure there was a series of unsuccessful renovation plans until Delilah’s bought the building in 2015. From 2006 onwards, 4 St Martins entered an extended period of disuse. During this period there were numerous changes in ownership and various planning applications were submitted.